All right, you win. Let’s call the frequent rampage of wanton violence by its true name. And while we are at it, let’s acknowledge that while in office President Obama has been loath to accurately name it. But before you begin to celebrate or lose yourself in one of those self-congratulatory boasts that so delight your supporters and so appall the rest of us, take a care: this phenomenon is not new and neither is its name. And while you and your supporters revel in a shared distain for political correctness, you might find that the real name is not to your liking and is perhaps not quite acceptable within the political circles you now inhabit. The real name for these acts of murderous rage is religious extremism and the phenomenon is not limited to one faith.

I know, I know. You protest that all of the religious violence in recent years has come from one religion, that the religion is Islam and that the term, therefore, should be Radical Islam. You’ve seen memes and Twitter postings that prove that all recent terrorist attacks have been carried out by Islamic extremists. You’ve even re-Tweeted some of these, so they must be true.

The problem, however, is that they are not true. While terror attacks by certain Muslims and Islamic groups appear to be carried out with greater stagecraft and certainly receive more publicity, they barely keep up with the kill rate of faith inspired murders committed by Christian soldiers. We know some of the names: Jim David Adkisson (Knoxville), Dylann Roof (Charleston), Robert Dear (Colorado Springs), Scott Roeder (Wichita). Going back a little further we have the deeply Christian roots of the Klu Klux Klan, the Mountain Meadows Massacre by Mormons in 1857, the Salem Witch murders of the late Seventeenth Century. And let’s not forget the glorious days of the Spanish Inquisition (1478-1834). Or the Great Crusades of the 11th Century in which kings, knights and serfs, blessed in advance by the Pope, murdered their way through the Jewish enclaves of Europe before descending on Palestine to kill as many Muslims as they could in the name of Our Lord. Go back a little longer to the Fourth and Fifth Centuries and you have the might of the Roman Empire being placed at the disposal of a newly empowered Christian Church, which promptly set to tearing up a thousand years of Greek and Roman scholarship, burning its books, and destroying all faiths (including alternative Christian faiths) that did not subscribe to the three as one and one as three God that the victors managed to formulate more than three centuries after Jesus taught something altogether different.

There is nothing so like ISIS soldiers destroying ancient artifacts and killing infidels in the name of Allah as the memory of a Christian mob destroying the Alexandrian Serapeum and all of its books in 391 or flaying the scholar Hypatia alive with floor tiles in 415.

Let me be clear. I do not mean to single out Christians as you single out Muslims. Perhaps every religion is subject to having atrocities committed in its name. Hindus, Sikhs and even Buddhists have succumbed to such zealotry at one time or another. But it is not the particular religion that motivates murder. Rather, Donald, the problem is zealotry itself, which arises when a segment of the faith becomes so certain that they are right, so convinced that they are doing the work of God and that their salvation depends upon doing it well and completely, that the behavioral limits with which we are all born as part of our common humanity are overwhelmed and in our attempt to serve God and become godly, we instead lose our humanity and become monstrous. 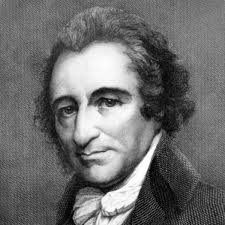 I wonder, Donald, if you ever think about how truly remarkable a thing was the creation of this nation of ours? How miraculous the circumstances that brought together a very few, thoughtful and forceful men to insist that the United States of America be founded upon the principle of freedom of religion and, just as importantly, freedom from religion? That this would happen was not preordained or inevitable. It was the work of men such as Thomas Jefferson, John Adams, George Washington, James Madison and their intellectual tutor, Thomas Paine. These men were not overtly Christian, Donald. They were avowed Deists, believing in God, but eschewing the entanglements and inevitable moral compromises required by theology. We owe everything our nation has achieved to these men and the principles of religious freedom upon which they insisted. This is something known to every immigrant, but, alas Donald, it is not known to you.

I think you have not thought about what truly makes America great, great always in aspiration even when she falls short in execution. How could you have thought about these things, when you are so ready to cast these principles aside in your pursuit of a more prestigious address? The war, Donald, must be on zealotry and in support of toleration. In that war we need all hands: Christians, Muslims, Sikhs, Hindus, Buddhists, Atheists, Agnostics, Deists and everyone else who will join. Don’t screw this thing up, Donald. You’ve entered upon the largest of stages. Whether you win or lose this election, your words and actions will affect the outcome of America’s more enduring battle against extremism.